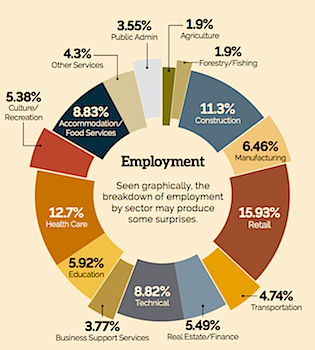 And what do they do? Perhaps these grads are poised to join the entrepreneurial class; start their own small businesses. Because that, it turns out, is what tons of people are doing. The Central Okanagan Economic Development Commission’s strategic plan notes that 95 per cent of businesses in the region have fewer than 20 employees—54 per cent have none.

“Kelowna and area is a hotbed for small business,” says Robert. We have about 16,000 of them. Many are home-based, one-person businesses (the 54 per cent with no employees), which curiously circles back to the tech sector in some ways. Maybe even to the free beer.

“Entrepreneurs can be lonely,” says Andrew.

But not everyone is sitting home alone, hunched over a computer. Statistics from 2012 indicate that we’re also a region of shopkeepers. The largest percentage of employment by industry (15.9 per cent) was in retail trade. So, lots of people minding the store.

But wait. Those suburbs on the hillsides aren’t building themselves. According to BC Stats, there are more than 3,000 firms involved in construction in the Central Okanagan. Those firms vary widely in size and scope (about 20 per cent have no employees), but employ 11.3 per cent of the local workforce.

And all those houses and condos and commercial spaces don’t sell or rent themselves either: real estate agents and all the other people in the business of property sales, rental and leasing form a substantial part of the business community as well—11.7 per cent of all Central Okanagan firms. But that percentage is weirdly skewed by the fact that most of those “firms” have no employees. Which is to say that they are mostly made up of self-employed individuals.

On the other hand, they might be among the 4,000 or so who work for Interior Health in Kelowna and area. Erin Toews, a communications officer with Interior Health reports that about 2,000 of these people are employed at Kelowna General Hospital alone. About 1,400 of them are nurses. “Then there are an additional 300 or so unit clerks and care aides as well,” says Toews. “It’s a busy place.”

In 2012 (the most recent stats available) the health care and social assistance category showed the second largest percentage of employment by industry.

A nice little convergence of our healthcare and digital industry profiles is QHR. This homegrown high tech company creates and sells cutting edge hospital management software that is used in both Canadian and American medical facilities. Headquartered in Kelowna, QHR employs about 100 people locally.

One thing that not everybody does (contrary to what our sense of the place tells us) is work in tourism-related businesses. The sector-by-sector analysis shows that while employment in the accommodation and food services industry grew by almost 11 per cent in the period 2008 through 2012, the number of firms involved is only around 4 per cent of total businesses. Even if we add in cultural industries (less than one per cent, but growing) and entertainment and recreation industries (less than one per cent) tourism/hospitality related businesses seem surprisingly few in number — about 575 of them according to economic development commission numbers.

And agriculture: the peaches, apples, cherries and grapes? Strangely, agriculture is in the same bin as fishing, forestry and hunting. (Hunting?) And it’s not a large bin?— a total of 574 firms. While wine making has given us a more attractive and sophisticated profile of late, and it has created a whole new group of professionals and workers, we are definitely not staying down on the farm any more.

Be that as it may, when those lifestyle refugees arrive at the Kelowna airport (around 2,000 people work there, by the way, when you include Flightcraft, a venerable local success story with a nearly 1,000-member workforce) they too will swoon and fall in love with the beaches, the peaches and those elegant vineyards that seem to stretch out their lovely arms and wave to you from every hillside.

And whatever their line of work, they’ll probably find something to do.